This is what changed the heart of a racist Malcolm X when he performed Hajj in Makkah, brought Muhammad Ali to Islam, still attracts the untouchables of India towards Islam. This  convinced  historian Professor A.J. Toynbee in 1948 to say : “The extinction of race consciousness as between Muslims is one of the outstanding achievements of Islam, and in the contemporary world there is, as it happens, a crying need for the propagation of this Islamic virtue.”

“Thereof (the earth) We created you, and into it We shall return you, and from it We shall bring you out once again” [Q20:55].

Nationalism & Xenophobia are completely alien and forbidden ideologies in Islam because the Prophet Mohammad (saw) said: “ ….. Leave it, It is Rotten ” (Bukhari).

It is narrated by Abu Daud that the Messenger of Allah (saw) said, “He is not one us who calls for `Asabiyah, (nationalism/tribalism/xenophobia, racism) or who fights for `Asabiyah or who dies for `Asabiyah.”

” …People should give up their pride in nations because this is a coal from the coals of hell-fire. If they do not give this up Allah (swt) will consider them lower than a lowly worm which pushes itself through khur (feaces).” [Tirmidhi]. Nationalism, xenophobia, racism, tribalism always have arrogant undertone. Abdullah ibn Mas’ud : Prophet (saw) said: “No one who has an atom’s-weight of arrogance in his heart will enter Paradise.” A man said, “O Messenger of Allaah, what if a man likes his clothes and his shoes to look good?” He said, “Allah is Beautiful and loves beauty. ARROGANCE MEANS REJECTING THE TRUTH AND LOOKING DOWN ON PEOPLE.” (Muslim).

The Messenger of Allah (saw) also said, “The believers, in their love, mutual kindness, and close ties, are like one body; when any part complains, the whole body responds to it with wakefulness and fever.” [Muslim]. “Every Muslim is a brother to a Muslim, neither wronging him nor allowing him to be wronged. And if anyone helps his brother in need, Allah will help him in his own need; and if anyone removes a calamity from [another] Muslim, Allah will remove from him some of the calamities of the Day of Resurrection; and if anyone shields [another] Muslim from disgrace, Allah will shield him from the disgrace on the Day of Resurrection.” [Al-Bukhari ].

Meaning that the Muslims, whether they are of Chinese, African, European or Asian origin, are one Ummah and they cannot be separated from each other. No nationalistic, xenophobic nor tribalistic ties should ever break their unity. “And hold fast, all of you together, to the Rope of Allâh (i.e. this Qur’ân), and be not divided among yourselves,” Q3:103. “If anyone proudly asserts his descent in the manner of the pre-Islamic people, tell him to bite his father’s penis, and do not use a euphemism”. (Sahih)

Let’s ask ourselves if the Muslim Ummah today, in its individual & collective behaviour is striving to adopt and promote these Islamic ideals?. Amazing to see some ignorant people who claim to be Muslims & Non-racial while performing Hajj & while doing worldly businesses with other Muslims; suddenly become racists when their children opt to marry upright Muslims from other tribes & races. Real Muslims & real human beings are colour, nationality, ethnicity & race blind. The feeling of superiority or inferiority over race, tribe, wealth, height, stature or colour is a sign of ingratitude & refusal of the decree of Allah because we have no control over the colour of our skin, race or tribe we are born into, it is the decree of the creator.

IMAM AL ALBAANI (RH) SAID A WHITE MAN WHO MAKES FUN OF A BLACK MAN OR VICE VERSA , THEY BOTH MAKE FUN (INSULTING ALLAH) WHO CREATED THEM BOTH. 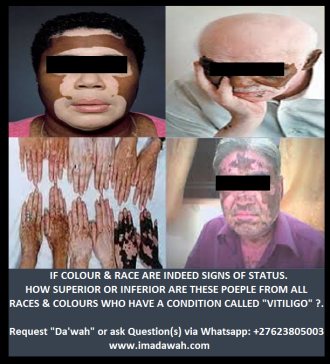 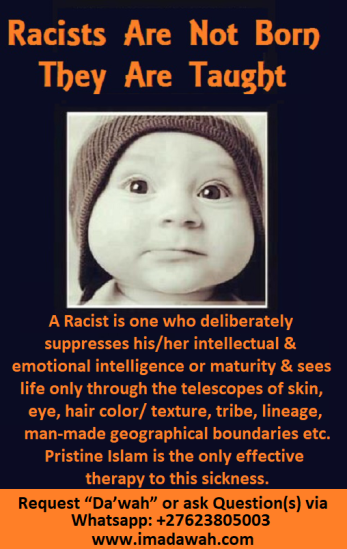 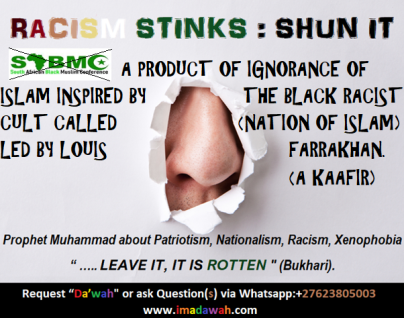 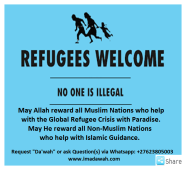 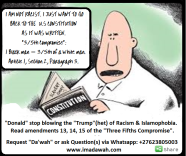 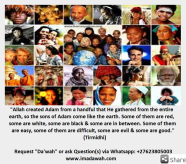 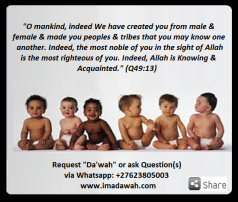 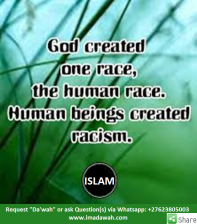