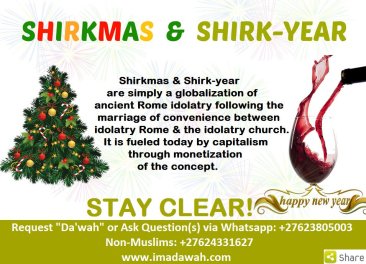 Christmas & New Year are paganism & lies. Many of the most popular Christmas customs – including Christmas trees, mistletoe, Christmas presents & Santa Claus – are modern incarnations of the most depraved pagan rituals ever practiced on earth. The exact date of Jesus’ conception & birth is unknown. In the 4th century CE, Christianity imported the Saturnalia festival hoping to take the pagan masses in with it. Christian leaders succeeded in converting to Christianity large numbers of pagans by promising them that they could continue to celebrate the Saturnalia as Christians. Roman culture already celebrated a holiday on December 25: Saturnalia, the winter solstice. This tradition honored Saturn, the god of agriculture, and was celebrated with merriment, feasting & gift giving. When Rome eventually instituted Christianity as the state religion in the 4th century, the Roman church converted Saturnalia to a Christian holiday in order to commemorate Jesus’ birth. Asheira cult & its offshoots were recruited by the Church sanctioning “Christmas Trees”. Pagans had long worshipped trees in the forest, or brought them into their homes and decorated them, and this observance was adopted & painted with a Christian veneer by the Church. Christmas has always been a holiday celebrated carelessly ever since. Since Christmas has its origins in pagan traditions, is it acceptable for Christians & non-Christians to celebrate it to remember the so called birth of their Lord & Saviour, Jesus Christ?. These individuals continue to celebrate Christmas based on innovations to the true message of Jesus by Paul; who changed it to idolatry called; Paulinity. It may be a matter of conscience for some, for as Paul states in 1 Corinthians 10:23: “‘Everything is permissible’—but not everything is beneficial. ‘Everything is permissible’—but not everything is constructive.” For millennia, pagans, Christians, ignorant Muslims & Jews have been swept away in the season’s festivities, and very few people ever pause to consider the celebration’s intrinsic meaning, history, or origins. Many who are excitedly preparing for their Christmas celebrations would prefer not knowing about the holiday’s real significance.  If they do know the history, they often object that their celebration has nothing to do with the holiday’s pagan history & meaning. They say “We are just having fun.”. Advertisers, politicians & all those who wish to control our thinking understand this & use different techniques to distract of from examining those issues in details. They know & understand that the louder, more frequently or more threatening something is being said, the less likely you will question its truth status. Truth to them is persuasion. Get the crowd to believe you & you have got the truth. We don’t realize what is not been said often because of what is being said too often. We have heard the statements “Jesus is God”, “, “Lord Jesus is the Savior” or “God Jesus” was born on the 25th of December so many times that they sound so true as if God almighty revealed it. Same for the New Year celebration we say “Happy New Year” without realizing that January 1st   came from the arbitrary decree of the consuls of ancient pagan Rome. The Gregorian calendar named after pope Gregory (III) who reigned over the Catholic Church in the 1500 was a revision of the Julian calendar (which was itself a revision of the pagan calendar). It retains most of the names of the days of the week and months of the year from pagan Rome. The ancient Greek named the days of the week after the sun, the moon & the 5-planets known then (mars, mercury, Jupiter, Venus, Saturn associated  with Ares, hermes, zens, Aphrodite & cronus respectively). January named after Janus; the 2 faced roman god of door-ways, March (mars); the god of war, April for the fertility of goddess Aphrodite, July ; Julius Caesar, August; august Caesar. In a nutshell, Shirkmas & Shirkyear are simply a globalization of ancient Rome idolatry following the marriage of convenience between idolatry Rome & the idolatry catholic church. It is fueled today by capitalism through monetization of the concept. They say, “Allah has taken a son.” Exalted is He! Rather, to Him belongs whatever is in the heavens and the earth. All are devoutly obedient to Him, Originator of the heavens and the earth. When He decrees a matter, He only says to it, “Be,” and it is. Q2 : 116-117. And [beware the Day] when Allah will say, “O Jesus, Son of Mary, did you say to the people, ‘Take me and my mother as deities besides Allah ?'” He will say, “Exalted are You! It was not for me to say that to which I have no right. If I had said it, You would have known it. You know what is within myself, and I do not know what is within Yourself. Indeed, it is You who is Knower of the unseen.  Q 5: 116. [He is] Originator of the heavens and the earth. How could He have a son when He does not have a companion and He created all things? And He is, of all things, Knowing. Q 6: 101. The Jews say Ezra is the son of God, while the Christians say the Messiah is the son of God. Such are their assertions, by which they imitate the infidels of old. God confound them! How perverse they are!
—Qur’an 9:30. They say, ‘God has begotten a son.’ God forbid! Self-sufficient is He. His is all that the heavens and the earth contain. Surely for this you have no sanction. Would you say of God what you know not? 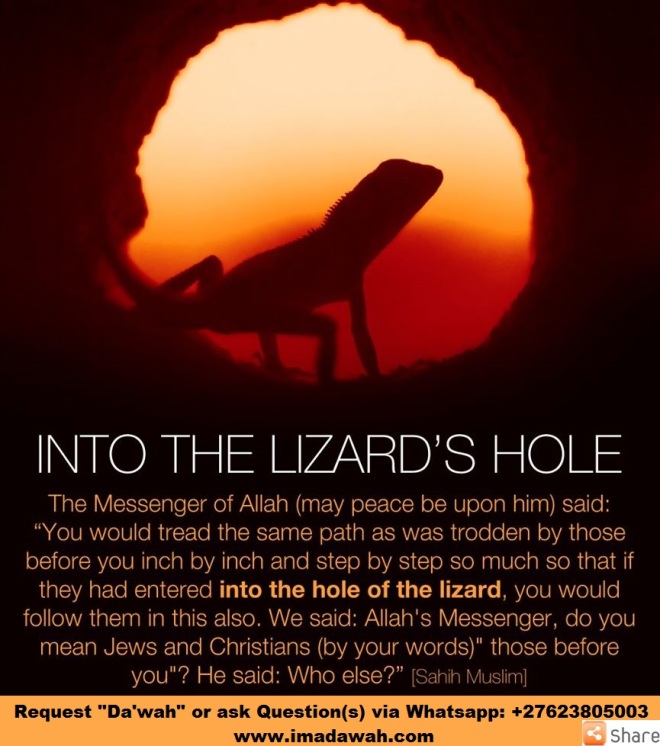 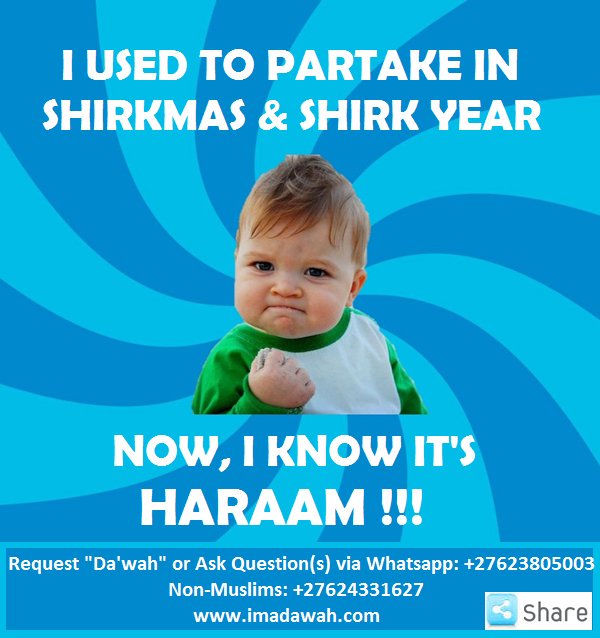 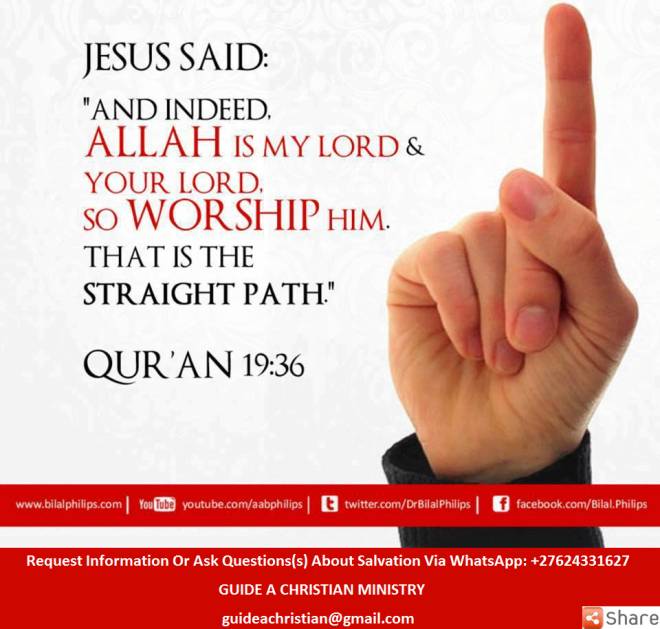 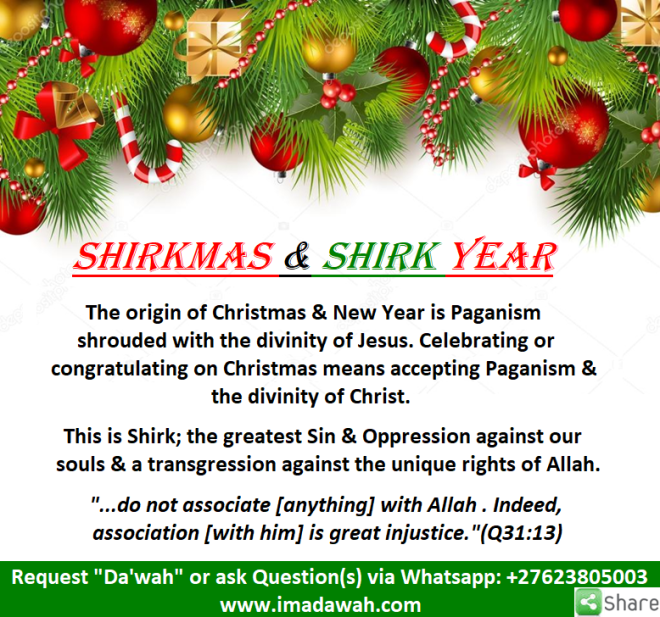