Ibn Katheer said: “and He is the Lord of the Mighty Throne” [9:129] means, He is the Sovereign and Creator of all things, because He is the Lord of the Mighty Throne which is the roof of creation. All created things, the heavens and the earth and all that is in them and in between them are beneath the Throne of Allaah and are subject to His power. His knowledge encompasses all things and His power controls all things, and He is Watcher over all things. (Tafseer Ibn Katheer, 2/405). “Owner of the Throne” [85:15] means, the Master of the Mighty Throne which is above all created things. “The Glorious” – there are two readings of this word (al-Majeed). If it is nominative (al-Majeedu) it is an adjective referring to the Lord, may He be glorified, and if it is genitive (al-Majeedi), it is an adjective referring to the Throne. Both meanings are correct. (Tafseer Ibn Katheer, 4/474). Majeed means vast and mighty in power. It was narrated from Abu Sa’eed that the Prophet (Sal Allaahu Alaiyhi wa Sallam) said: “The people will fall unconscious on the Day of Resurrection; I will be the first to regain consciousness, and Moosa will be there, holding on to one of the pillars of the Throne. I do not know whether he woke up before me or if he was exempted because he had fallen unconscious at the Mount of Sinai.” (Bukhaari). The Throne has bearers who carry it. Allaah says: “Those (angels) who bear the Throne (of Allaah) and those around it glorify the praises of their Lord, and believe in Him, and ask forgiveness for those who believe (in the Oneness of Allaah) (saying): ‘Our Lord! You comprehend all things in mercy and knowledge, so forgive those who repent and follow Your way, and save them from the torment of the blazing Fire!’” [40:7]. They are of immense size: Jaabir ibn ‘Abd-Allaah that the Messenger of Allaah (Sal Allaahu Alaiyhi wa Sallam) said: “I have been granted permission to speak about one of the angels of Allaah, one of the bearers of the Throne. The space between his earlobes and his shoulders is the distance of seven hundred years’ travelling. (Abu Dawood). Al-Haafiz Ibn Hajar said concerning this hadeeth: its isnaad meets the conditions of being saheeh. (Fath al-Baari, 8/665).

The shaking of the Throne at the death of Sa‘d ibn Mu‘aadh was only because of the joy of the Lord, may He be exalted; it was not a reflection of any imperfection https://islamqa.info/en/197531

Does the Throne of Allaah shake because of divorce? NO

Shaykh `Abd al-Ghani al-Nabulusi’s (d. 1143) : “Whoever believes that Allah permeates the Heavens and the Earth, or that He is a body sitting on His Throne, is a disbeliever, even if he thinks of himself as a Muslim. IBN HAJAR ALSO REJECTED THE STATEMENT THAT ALLAH IS ON THE THRONE “IN PERSON” AS EQUALLY PREPOSTEROUS AS SAYING THAT HE IS EVERYWHERE “The Throne is neither Sovereignty (al-Mulk) nor the Kursiy. Ibn Abi’l-‘Izz al-Hanafi said: What would those who distort the word of Allaah and say that the Throne is an expression referring to al-Mulk or sovereignty say about the following aayat? –

Abu Dharr (may Allaah be pleased with him) said: I heard the Messenger of Allaah (Sal Allaahu Alaiyhi wa Sallam) say: “The Kursiy in relation to the Throne is like an iron ring thrown out into empty land.” AND, AS ONE OF THE SALAF SAID, BEFORE THE THRONE IT IS LIKE A STEP. (Sharh al-‘Aqeedah al-Tahhaawiyyah, p. 312, 313). Shaykh Ibn ‘Uthaymeen said: There are those who say that the Kursiy is the Throne because of the hadeeth, “Allaah will set up His Kursiy on the Day of Resurrection.” They think that the Kursiy is the Throne. Similarly, some people claim that the Kursiy is Allaah’s knowledge, and say that the aayah: “His Kursiy extends over the heavens and the earth” [2:255] refers to His Knowledge. The correct view is that the Kursiy is a footstool, and the Throne is that which the Most Merciful rose above (istiwaa’). And knowledge is the attribute of the knowledgeable one by means of which he understands that which he knows. (al-Qawl al-Mufeed Sharh Kitaab al-Tawheed, 3/393, 394). Allah, may He be glorified and exalted, is unique in His divinity, so there was no created entity with Him in past eternity. Rather He was Allah, and there was nothing before Him. Then He created His creation and rose above His Throne, as He has told us in His Book, in such a manner as He willed, may He be exalted, and there is none that can dispute with Him regarding His sovereignty and He has no partner in His authority. The Throne, angels bearing the throne, water, the heavens and all creatures only exist and continue to exist by the support of their Lord, Who is the one who created them and created them for the purpose for which they were created, and sustained them and provided for them, and that the Throne needs its Lord, and it is held up by His might and power not by the powers of the angels tasked to bear it, for “Verily! Allah grasps the heavens and the earth lest they move away from their places, and if they were to move away from their places, there is not one that could grasp them after Him. Truly, He is Ever Most Forbearing, Oft-Forgiving” [35:41]. It was reported from Abu Hurayrah (radiallahuanihu) said that the Prophet (Sal Allaahu Alaiyhi wa Sallam) said: “There are seven whom Allaah will shade with His shade on the day when there will be no shade except His: the just ruler; a young man who grows up worshipping his Lord; a man whose heart is attached to the mosque; two men who love one another for the sake of Allaah and meet and part on that basis; a man who is called by a woman of rank and beauty and says ‘I fear Allaah’; a man who gives in charity and conceals it to such an extent that his left hand does not know what his right hand gives; and a man who remembers Allaah when he is alone, and his eyes fill up.” (Agreed upon). Tap link for details of these (7).  https://islamqa.info/en/924  Are you one of them? Tap this link to know the virtues of the Greatest Ayah of the Qur’an (Aayat al-Kursiy) https://islamqa.info/en/6092 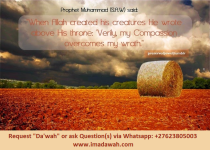