*God wanted to test him once again by asking Ibrahim to slaughter his own son. It was an extraordinary test; but the father & the son took this as a divine will*.

They were just about to perform this act when God let an animal to be slaughtered instead.

*But as soon as the two had surrendered themselves to the will of Allah & Ibrahim (alayhi salatu wasallam)  laid him down on his face, We called out to him: O Ibrahim, thou hast already fulfilled that dream vision.” (Q37:103-105)*.

It was a heavenly mercy on humanity. Ibrahim (alayhi salatu wasallam) was elevated & became *GOD’S FRIEND (KHALILULAH)*. *Thus came the rituals of Hajj commemorating Ibrahim’s & his family’s sacrifice & accomplishment in the tests from God*.

The rituals of Hajj, decreed on every able Muslim, *are directly linked to the wilful surrender of three noble souls on earth to God – IBRAHIM, HAJAR & ISMAIL.* The legacy & spirit of human self-surrender to God are embedded in this fifth pillar of Islam.Ibrahim surrendered to God wholeheartedly.

✅ *He was a TRUE MUSLIM (SUBMITTER) & as such God made him the FATHER OF THE MUSLIM NATION.*

*… Keep the faith of your father Ibrahim. Allah named you MUSLIMS (SUBMITTERS) earlier and even in THIS BOOK, that the Messenger may be a witness over you and that you may be witnesses over all mankind… (22:78)*

After about 3,000 years, mankind saw Ibrahim’s prayer coming true *through Prophet Muhammad (sallAllaahu ‘alayhiwasallam), a descendant of Ismail, who rekindled & revitalised the original message of Islam to its peak*.

*Our Lord! Raise up in the midst of our offsprings a Messenger from among them who shall recite to them Your verses, and instruct them in the Book and in Wisdom, and purify their lives. Verily, You are the Most Mighty, the Most Wise. (Q2:129)*

Ibrahim (alayhi salatu wasallam) remained *visionary & missionary all through his life*. He witnessed the ignominy and sufferings of fellow human beings by others & by the enslavement to their own desires & man-made idols. He challenged the status quo & remained at the forefront of struggles by dedicating his whole life. HE SUCCEEDED IN BRINGING PEOPLE TO THEIR REAL DESTINY, I.E., AS GOD’S EMISSARY ON EARTH.He started this alone, but this multiplied manifold over the millennia by God’s grace.

Ibrahim (alayhi salatu wasallam) was chosen to lead humanity in its dark period. His legacy as a Prophet and a great leader is a living memory to mankind.

*We can learn from his life in the midst of another dark phase of human history today when our world is under the spell of Godlessnes, crude materialism & worship of Man made gods (Jesus, bhuda, vishnu etc)*. 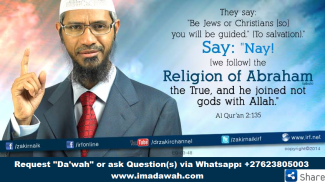 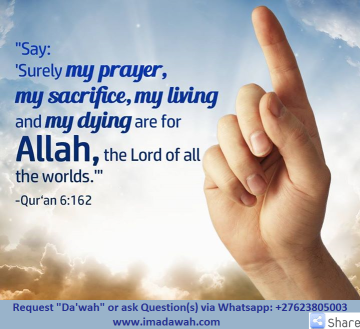