SHAVING THE HEAD OR CUTTING THE HAIR

When the pilgrim who is doing Tamattu’ has completed seven circuits of saa’i, he should shave entire head or cut from all over his head. Shaving is better than cutting. Prophet (sallAllaahu ‘alayhiwasallam) made du’aa’ three times for those who shaved their heads & once for those who cut their hair  (Muslim). If the time of Hajj is so close that there will be no time for the hair to grow back, then it is better to cut one’s hair at this point, so that there will be some hair left to shave during Hajj. Prophet (sallAllaahu ‘alayhiwasallam) commanded his companions, during the Farewell Pilgrimage, to cut their hair during ‘Umrah, because they arrived on the morning of the 4th of Dhu’l-Hijjah. Women should cut the length of a fingertip from their hair. The ‘Umrah of the one who is doing Tamattu’ is concluded, he should exit ihraam completely & can do everything that those who are not in ihraam do e.g. wearing regular clothes, perfume, intercourse etc.

Those who are doing Ifraad or Qiraan should not shave their heads or cut their hair, or exit ihraam, rather they should remain in ihraam until they exit ihraam on the day of Eid, after stoning Jamarat al-‘Aqabah.

On day of al-Tarwiyah; the 8th day of Dhu’l-Hijjah, the one who is doing Tamattu’ should re-enter ihraam for Hajj in the morning from the place where he is in Makkah as before. He should form the intention of entering ihraam for Hajj & recite the Talbiyah, & say, “Labbayk Allaahumma Hajjan (Here I am, O Allaah, for Hajj).”

The pilgrim goes to Mina & prays Zuhr, ‘Asr, Maghrib, ‘Isha’ & Fajr there, shortening the prayers but not joining them. Prophet (sallAllaahu ‘alayhiwasallam) used to shorten (making the 4-rak’ah prayers 2) his prayers in Mina but he did not join them. The people of Makkah & others should shorten their prayers in Mina, ‘Arafah and Muzdalifah because Prophet (sallAllaahu ‘alayhiwasallam) used to lead the people in prayer during the Farewell Pilgrimage and there were people from Makkah with him, but he did not tell them to offer their prayers in full. But since the city has spread and incorporated Mina so that it is like one of the quarters of Makkah, then the people of Makkah should not shorten their prayers there.

When the sun rises on the day of ‘Arafah, the pilgrim travels from Mina to ‘Arafah & stops in Namirah until the time of Zuhr (Namirah is a place just before ‘Arafah), if he can do so because It is Sunnah  but not obligatory. When the sun passes its zenith (i.e. when the time for Zuhr prayer begins), he should pray Zuhr and ‘Asr, two rak’ahs each,& join them together at the time of Zuhr, as the Prophet (sallAllaahu ‘alayhiwasallam) did, so as to leave a lot of time for standing and making du’aa’.

Then after the prayer he should devote his time to making dhikr & du’aa’, raising his hands & facing the qiblah even if the mountain of ‘Arafah is behind him (the Sunnah is to face the qiblah, not the mountain. The Prophet (sallAllaahu ‘alayhiwasallam) stood by the mountain & said, “I am standing here, but all of ‘Arafah is the place of standing.” Prophet’s du’aa’ in that great place of standing was: “Laa ilaaha ill-Allaah wahdahu laa shareeka lah, lahu’l-mulk, wa lahu’l-hamd, wa huwa ‘ala kulli shay’in qadeer (There is no god but Allaah alone, with no partner or associate; His is the Dominion, all praise is due to Him, and He is able to do all things).”The best of du’aa’ is du’aa’ made on the day of ‘Arafah.

At sun set, the pilgrim goes to Muzdalifah. He should pray Maghrib & ‘Isha’ with one adhaan & two iqaamahs. If he fears that he will not reach Muzdalifah before midnight, he should pray on the way, because it is not permissible to delay ‘Isha’ prayer until after midnight.

He should stay overnight in Muzdalifah, then when dawn comes he should pray Fajr early, with the adhaan & iqaamah, & then head for al-Mash’ar al-Haraam (which is the site of the mosque in Muzdalifah) & proclaim the oneness and greatness of Allaah (by saying Laa ilaaha ill-Allaah & Allaahu akbar), and making du’aa’ as he likes (i.e., when the light of day appears before the sun has actually risen). If it is not easy for him to go to al-Mash’ar al-Haraam, he should make du’aa’ where he is. Prophet (sallAllaahu ‘alayhiwasallam) stood there & all of Muzdalifah is the place of standing. When he is reciting dhikr & making du’aa’ he should face the qiblah & raise his hands. 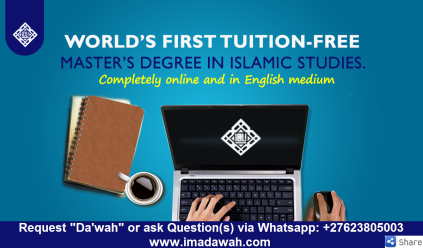 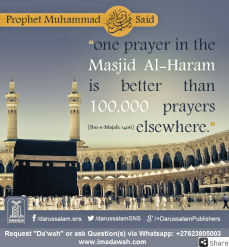