WOLVES IN SHEEP CLOTHINGS 1 of 2 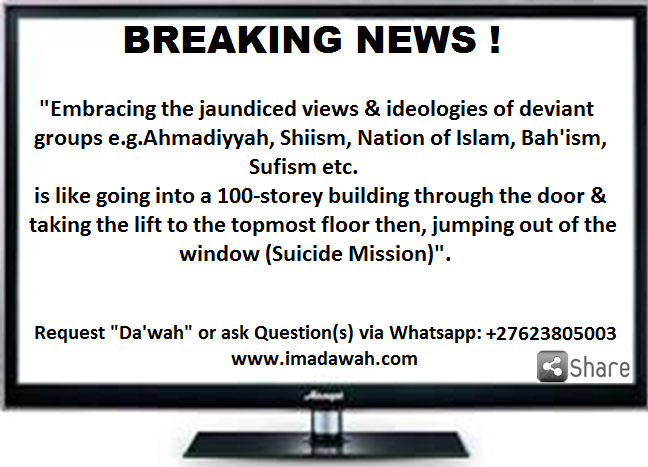 “Verily, those who divide their religion and break up into sects, you have no concern in them in the least. Their affair is only with Allah, Who then will tell them what they used to do.” (6:159).

It started as a political opinion which favoured some views of Ali, the cousin of the Prophet, over some other companions, it however eventually became a sect purporting strange ideas foreign to Islam. This was due to the fact that this ideology was mainly espoused by people in areas far from the centres of Islamic learning; Persia, those who were either new to Islam, converted to Islam nominally, but remained upon their previous religions. Thus, the Shiites became fertile soil for the introduction of foreign ideas in beliefs from Judaism, Zoroastrianism & Islam. No wonder one of the most important shrines visited for worship of their so called saints by many Shiites is that of Abu Lu’lu’ah, a Zoroastrian who killed the  2nd Caliph; Umar (radiallahuanihu).This shrine is located in the city of Kashan, Iran. Muhammad Ali Mu’zi, an Iranian Shiite researcher in France, stated:

“The basic fundamentals of the Zoroastrian religion has entered into Shiism even in some minute issues. …And this relationship marked the brotherhood between Shiism & the ancient Magian (Majoos) Iran.”

Shiites believe in the veneration & calling on others besides God. For them, Homage is to be paid to great saints & martyrs, such as Ali, Hussein, Fatimah, their Imams, and they believe that they can answer their calls, help them as well as intervene for them with God, a belief that according to Islam is clear shirk.

They believe thunder & lightening is caused by these so called “12 infallible Imams”.

“And among His Signs is that He shows you the lightning, by way of fear and hope, and He sends down water (rain) from the sky, and therewith revives the earth after its death. Verily, in that are indeed signs for a people who understand.”(30:24)

In authoritative Shiite texts, its states:

“The Imams have knowledge of whatever occurred in the past and whatever will happen in the future, and nothing is concealed from them.” (Al-Kulaini, Al-Kaafi, p.260)

“The Imams have knowledge of all the revealed books, regardless of the languages in which they were revealed” (Ibid, p.227)

“The Imams know when they will die, and they do not die except by their own choice” (Ibid, p.258)

“All of the earth belongs to the Imams.” (Ibid, p.407) “Say: ‘None in the heavens and the earth knows the unseen except Allah, nor can they perceive when they shall be resurrected.” (Q27:65)

All the previous Prophets e.g. Noah, Ibrahim, Musa, Jesus (Peace be upon them all) all invoked God Almighty by the names of these Imams at their times of need & trials. (Wasa’il As-Sheea, 4/1143). 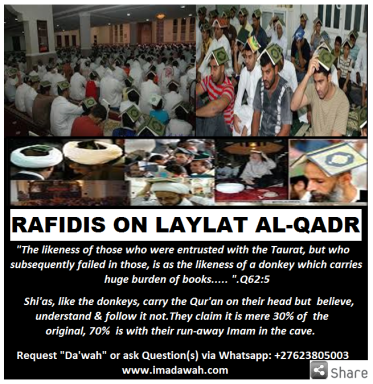 “Verily, whosoever sets up partners in worship with Allah, then Allah has forbidden Paradise for him, and the Fire will be his abode.” (5:72)

Shiism differs from Islam in the first & most important pillar of Islam i.e the Shahaadah. This testimony is the most important aspect of Islam, & the whole religion is built upon it (unique & absolute monotheism).

The Prophet (sallAllaahu‘alayhiwasallam): “No one says ‘La ilaaha ill-Allah’ and dies firmly upon it, but he/she will enter Heaven (Paradise).” (Al-Bukhari).

The Shiites, however, have a different ‘testimony of faith’ different from that of the Qur’an. They not only negate its meanings, as earlier shown by associating others with God, but they have also added certain principles nowhere to be found in authentic texts. THEIR SHAHAADAH COMPRISES OF THE STATEMENT: “NONE DESERVES WORSHIP BUT GOD, AND THAT MUHAMMAD IS HIS SLAVE AND MESSENGER, AND ALI IS HIS BELOVED AND CHOSEN ONE, AND SUCCESSOR TO THE PROPHET.”