(31) PARABLE OF THE LAMP/LIGHT [24:35-36] Allah is the Light of the heavens and the earth. The parable of His Light is as (if there were) a niche and within it a lamp, the lamp is in glass, the glass as it were a brilliant star, lit from a blessed tree, an olive, neither of the east (i.e. neither it gets sun-rays only in the morning) nor of the west (i.e. nor it gets sun-rays only in the afternoon, but it is exposed to the sun all day long), whose oil would almost glow forth (of itself), though no fire touched it. Light upon Light! Allah guides to His Light whom He wills. And Allah sets forth parables for mankind, and Allah is All-Knower of everything. 36. In houses (mosques), which Allah has ordered to be raised (to be cleaned, and to be honoured), in them His Name is glorified in the mornings and in the afternoons or the evenings,

MEANING: Allah is the ‘Nur’ [Light] of the heavens and the earth. Those who believe are guided to this Nur by righteousness. The light of iman [belief] shines in the houses where Allah is remembered [the believers’ houses].

(32) MIRAGE [24:39]  As for those who disbelieve, their deeds are like a mirage in a desert. The thirsty one thinks it to be water, until he comes up to it, he finds it to be nothing, but he finds Allah with him, Who will pay him his due (Hell). And Allah is Swift in taking account.

MEANING: The deeds of unbelievers are not worth anything in the Hereafter, just like the mirage of water in the desert is not actual water. Unbelievers think they are correct. Disbelievers are therefore deceived by Satan into believing that they will be admitted into Paradise even though they disbelieve.

. (33) DEPTHS OF DARKNESS [24:40] Or (the state of a disbeliever) is like the darkness in a vast deep sea, overwhelmed with a great wave topped by a great wave, topped by dark clouds, darkness, one above another, if a man stretches out his hand, he can hardly see it! And he for whom Allah has not appointed light, for him there is no light.

MEANING: Unbelievers are enveloped in total metaphorical darkness. They are not guided by Allah’s Light and therefore do not believe, do righteousness and end up in Hell.

(34) SPIDER [29:41] The likeness of those who take Auliya (protectors and helpers) other than Allah is as the likeness of a spider, who builds (for itself) a house, but verily, the frailest (weakest) of houses is the spiders house; if they but knew.

MEANING: Polytheists give themselves false consolation when they worship idols. They believe that they are worshipping beings of great power but, in fact, they are wasting time in their delusions and flimsy consolation.

(35) PARTNERS [30:28] He sets forth for you a parable from your own selves, – Do you have partners among those whom your right hands possess (i.e. your slaves) to share as equals in the wealth We have bestowed on you? Whom you fear as you fear each other? Thus do We explain the signs in detail to a people who have sense. 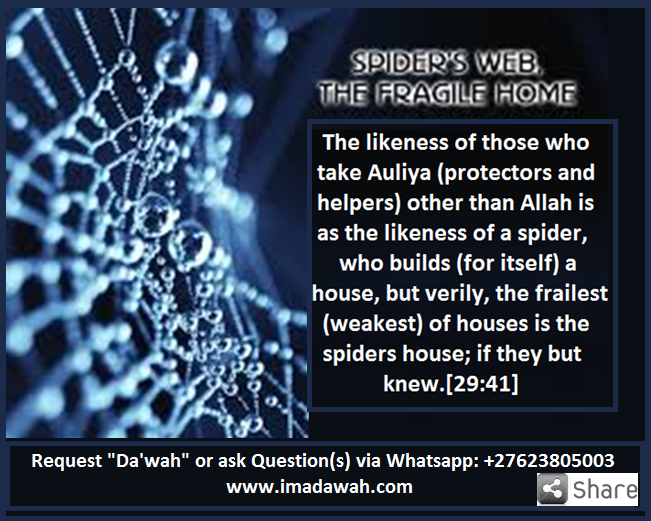 (36) COMPANIONS OF THE CITY [36:13-32] And put forward to them a similitude; the (story of the) dwellers of the town, (It is said that the town was Antioch (Antakiya)), when there came Messengers to them.14. WhenWe sent to them two Messengers, they belied them both, so We reinforced them with a third, and they said: “Verily! We have been sent to you as Messengers.” 15. They (people of the town) said: “You are only human beings like ourselves, and the Most Beneficent (Allah) has revealed nothing, you are only telling lies.” 16. The Messengers said: “Our Lord knows that we have been sent as Messengers to you, 17. “And our duty is only to convey plainly (the Message).”18. They (people) said: “For us, we see an evil omen from you, if you cease not, we will surely stone you, and a painful torment will touch you from us.”19. They (Messengers) said: “Your evil omens be with you! (Do you call it “evil omen”) because you are admonished? Nay, but you are a people Musrifoon (transgressing all bounds by committing all kinds of great sins, and by disobeying Allah). 20. And there came running from the farthest part of the town, a man, saying: “O my people! Obey the Messengers; 21. “Obey those who ask no wages of you (for themselves), and who are rightly guided. 22. “And why should I not worship Him (Allah Alone) Who has created me and to Whom you shall be returned. 23. “Shall I take besides Him aliha (gods), if the Most Beneficent (Allah) intends me any harm, their intercession will be of no use for me whatsoever, nor can they save me? 24. “Then verily, I should be in plain error. 25. Verily! I have believed in your Lord, so listen to me!” 26. It was said (to him when the disbelievers killed him): “Enter Paradise.” He said: “Would that my people knew! 27. “That my Lord (Allah) has forgiven me, and made me of the honoured ones!” 28. And We sent not against his people after him a host from heaven, nor doWe send (such a thing). 29. It was but one Saihah (shout, etc.) and lo! They (all) were silent (dead-destroyed). 30. Alas for mankind! There never came a Messenger to them but they used to mock at him. 31. Do they not see how many of the generations We have destroyed before them? Verily, they will not return to them.32. And surely, all, everyone of them will be brought before Us. And indeed We have put forth for men, in this Quran every kind of similitude in order that they may remember. 28. An Arabic Quran, without any crookedness (therein) in order that they may avoid all evil which Allah has ordered them to avoid, fear Him and keep their duty to Him. [39: 27-28]

MEANING: Allah’s messengers were sent to preach Islam in a city but the citizens threatened to stone them and punished them, thinking that they were evil. The messengers said, “You’re the ones that are evil – how can you call guidance an ‘evil’. You have yourselves exceeded all limits to evil?” One believing citizen from the farthest part of the city came running and exhorted his fellow citizens to follow the messengers, making the following points: i] obey the messengers because they don’t want money or any other reward from you ii] messengers themselves have received Guidance from Allah and are spreading this iii] worship Allah because only Allah created you iv] you will go back to Allah for judgement v] why should I worship idols, statues who could not save me, either by fighting Allah or interceding with Allah on my behalf, if Allah decides to punish me vi] if I were to be an idolater, I would really be on the wrong path. Allah forgave this man and told him to enter Paradise. He still cared for his fellow citizens and wished that they could somehow find guidance. Allah sent no more messengers to that place. There was a massive volcanic eruption and the citizens became embalmed in ashes. Allah grieves for those who deserved punishment because they mocked messengers. This was not the first incident to happen. Many generations before them were destroyed for the same reason. All of them will be taken to task by Allah on the Day of Judgement.

MEANING: Allah reminds us forgetful humans that He created the universe from nothing (He simply said be; & it is), he further created  Adam from earth, then subsequent human creation from a humble beginning of male & female discharges. Is He, who could create from nothing in the first place not going to be able to create from something in the second place? Which is easier?

(38) ONE MASTER AND SEVERAL MASTERS [39:29] Allah puts forth a similitude: a (slave) man belonging to many partners (like those who worship others along with Allah) disputing with one another, and a (slave) man belonging entirely to one master, (like those who worship Allah Alone). Are those two equal in comparison? All the praises and thanks be to Allah! But most of them know not.

MEANING: Allah is telling them they are unfair people who attribute what they do not like to Allah by referring to the angels as females & not males (who they give preference to over females).In addition they worship them & blame Allah for allowing them to worship them. So, they say that they are committing the sin because Allah has destined that they will commit it instead of accepting that they are doing that out of their own free will, Allah only knew before- hand that they were going to commit sins, but Allah did not force them to commit sins.

. (40) GARDEN PROMISED TO THE RIGHTEOUS WITH FOUR KINDS OF RIVERS [47:15] The description of Paradise which the Muttaqoon (pious – see V.2:2) have been promised is that in it are rivers of water the taste and smell of which are not changed; rivers of milk of which the taste never changes; rivers of wine delicious to those who drink; and rivers of clarified honey (clear and pure) therein for them is every kind of fruit; and forgiveness from their Lord. (Are these) like those who shall dwell

forever in the Fire, and be given, to drink, boiling water, so that it cuts up their bowels?