Scholars have deduced from the Quran & Sunnah that For Allah to accept our deeds  3 conditions must be satisfied. (1) Tawheed Say, “I am only a man like you, to whom has been revealed that your god is one God. So whoever would hope for the meeting with his Lord – let him do righteous work and not associate in the worship of his Lord anyone.” Q 18 :110. (2) Sincerity…Tameem Ad-Dari reported: The Messenger of Allah,  () “Religion is sincerity or sincere goodwill.” We said, “To whom?” The Prophet said, “To Allah, His Book, His Messenger, the leaders of the Muslims, and their common people.”. (3) Mutahaba (Total Compliance) “Certainly you have in the Messenger of Allah an excellent example for him who hopes in Allah and the Last Day’, & remembers Allah much”.Q33: 21. Allah says: “He who obeys the Messenger has indeed obeyed Allah . . .” [4:80] [8:24] .”…So take what the messenger assigns to you & abstain from that which he forbids you …” (59:7).”If you do love Allah, Follow me: Allah will love you & forgive you your sins …” (3:31).

Abu Dharr (radiallahuanihu) : Messenger (Sal Allaahu Alaiyhi wa Sallam): “There is nothing by means of which one may draw close to Paradise & move far away from Hell but it has been explained to you. (Tabarani). The scholars have divided these teachings of the prophet into 4  categories 1) Sunnah Qawliyyah; verbal  Sunnah; doing what he commanded  2)  Sunnah fihinliyyah (doing what he did 3) Sunnah Takririyyah: doing what he was silent about or approved of. 4) Sunnah tarkiyyah (abandoning what he did not do inspite of the need for it e.g. he commanded adhan for all the other prayers but not for the eclipse prayer and not for the eid prayers inspite of the need for it. For instance, he observed nawafil like (tahajud  & taraweeh) sometimes individually & sometimes in Jamah. However, he never observed Tahiyaat-ul-masjid (2 rakah of greeting the masjid) & rawatib (nawafils  before or after obligatory salah ) in jammah . He said salah in Jamah is more rewarding than individual salah. Can we conclude from all these put together that we can observe Tahiyaat-ul-masjid  (2 rakah of greeting the masjid) & rawatib (nawafil  before or after obligatory salah ) in jammah  because  the prophet did that with (tahajud /taraweeh)  & because the reward of salah in jamah is greater ? No one will agree to this. Why? because the prophet (Sal Allaahu Alaiyhi wa Sallam) never prayed them that way. Doing that becomes an innovation in the deen. No, we cannot do it because the prophet never did it that way. So, it is Sunnah not to do what the prophet (Sal Allaahu Alaiyhi wa Sallam) did not do (in the deen).

There is no doubt that as conscious Muslims we all want to do dawah & spread the only true message for salvation; AL ISLAM especially in this era of communications explosions & information overload. Also, our intentions are good in sharing Islamic messages & snippets; however, every Muslim is to be very careful in what he/she broadcasts spreads, says, writes about the Prophet (Sal Allaahu Alaiyhi wa Sallam), so that he will not fall into the sin of telling lies about him. Statements are not just to be attributed to the prophet simply because they sound full of wisdom, correct & true, or have a beautiful meaning or eloquent wording or because they appear good without verifying from competent scholars if he actually said that. Messenger of Allah said: “Whoever narrates a hadeeth from me knowing that it is false is one of the liars.” .Abu Hurayrah (radiallahuanihu) Messenger of Allah (Sal Allaahu Alaiyhi wa Sallam) said: “Whoever deliberately tells a lie about me, let him take his place in Hell.” Agreed upon. Al-Nawawi (may Allah have mercy on him) said: Whoever narrates the hadeeth, knowing or thinking that it is most likely fabricated, and does not explain the facts about its narration and that it is weak, is included in this warning and comes under the heading of the liars who tell lies about the Messenger of Allah (Sal Allaahu Alaiyhi wa Sallam). There are enemies of Allah & His Prophet who capitalize on the prevalent  ignorance  of the knowledge of pure & pristine Islam among  Muslims to forward fabricated statements & call them authentic hadiths by simply adding in a bracket beside it bukhari or Muslim etc. We should develop the habit of verifying & putting authenticated references to whatever we receive/forward to people; even if it has been forwarded to us without a reference. It is not enough to write “sent as received” or “the prophet said something to that effect” or “it is said” & forward it thinking we are free of blame. We should also not take offence when asked for references regarding our claims about the deen, because Allah says  Q2:111.”…….say to them Oh Muhammad bring your proof if you are truthful”. Finally, we need to remember that sharing Islamic “snippets” or messages is neither an emergency that cannot await verification nor a competition. “He sent a hadeeth in order to spread good, then he found out that it is a fabricated hadeeth. What should he do?” https://islamqa.info/en/66273. How can we recognize false fabricated (mawdoo’) ahaadeeth? https://islamqa.info/en/34578. May Allah save us from the Hell fire. 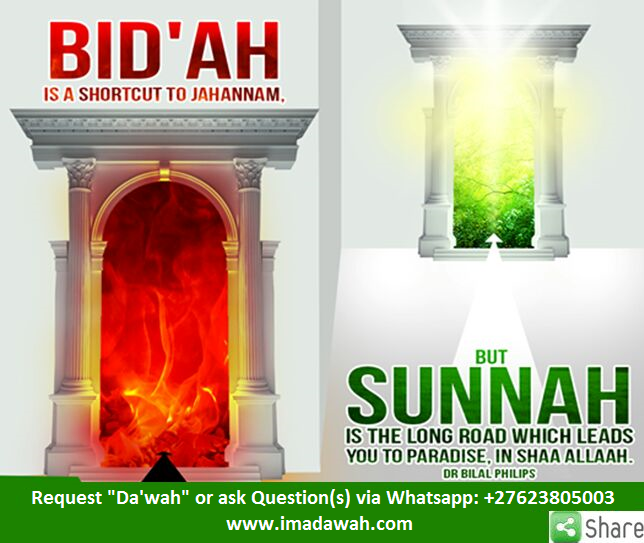