”But no, by your Lord, they can have no Faith, until they make you [Muhammad] judge in all disputes between them, & find in themselves no resistance against your decisions, & accept (them) with full submission.” [4:65].”.”…So take what the messenger assigns to you & abstain from that which he forbids you …” (59:7).”If you do love Allah, Follow me: Allah will love you & forgive you your sins …” (3:31).

“. . . And let those who oppose the Messenger’s commandment beware, lest some fitnah (trial, affliction, etc.) befall them or a painful torment be inflicted on them.” [24:63]

“. . . And if you differ in anything amongst yourselves, refer it to Allah & His Messenger. [4:59]. “Certainly you have in the Messenger of Allah an excellent example for him who hopes in Allah and the Last Day’, & remembers Allah much”.Q33: 21. Fellow believers, anyone who claims to FOLLOW ONLY THE QURAN WITHOUT THE SUNNAH has automatically denied the Quran because he has automatically rejected the above verses of the Quraan which command us to follow, obey the prophet. Without the preserved authentic Sunnah we will not be able to obey these verses of the Quran. The Quraan gave broad principles & instructions regarding acts of worship e.g. salah, zakah, fasting, hajj but the Sunnah explained into details the How? What? When? Who? & Where? Of all the commands of Allah. FOOD FOR THOUGHT FOR DEEP THINKERS. Prophet (Sal Allaahu Alaiyhi wa Sallam) said: “I do not want to see any one of you reclining on his couch &, when he hears of my instructions or prohibitions, saying ‘I don’t accept it; we didn’t find any such thing in the Book of Allah.’” Abu ‘Eesaa said: (saheeh hasan Tirmidhi). Al-’Irbaad ibn Saariyah,; “the Messenger (Sal Allaahu Alaiyhi wa Sallam) led us in prayer one day, then he turned to us & exhorted us strongly . . . (he said), ‘Pay attention to my sunnah (way) & the way of the Rightly-guided Khaleefahs  after me, adhere to it & hold fast to it.’” (Abi Dawud). He (Sal Allaahu Alaiyhi wa Sallam) said “None of you will have faith till he loves me more than his father, his children & all mankind” (Bukhari).

Many ignorant Muslims have no problems paying “lip service” of loving & accepting the prophet (Sal Allaahu Alaiyhi wa Sallam), seeking blessings on him & celebrating the innovations of Mawlid; but in their delusion, he is not important enough to be seen as a role model & emulated in his Sunnah to the letter. They accept him & simultaneously deny him. What a double standard! It is hypocrisy to make a distinction between the Sunnah & the Qur’an in terms of adhering to them. Anyone who rejects the authentic Sunnah of the prophet (Sal Allaahu Alaiyhi wa Sallam) has automatically rejected the Qur’an. No wonder, all the kufr/deviant groups (Shia, Nation of Mislam, Ahmadiyyah, Modernists movements, Quraniyyun, Bahis, Agha khanis, Sufis,Ibadis etc); have a meeting  point (Denial of  the Sunnah, followed by the automatic denial of the Qur’an). Ironically, it is these same people who belittle or deny authentic Sunnah that promote innovations of mawlid & the likes.

A young man after embracing Islam started to grow beards. A supposedly fellow Muslim, perhaps a modernist or a Sufi, said to him, “keeping beards is not an essential requirement of Islam. “The revert brother said “Keeping beard is one of the clear commands of the Prophet & who am I to judge the essentiality of the Prophet’s orders.” Allah says “…So take what the messenger assigns to you & abstain from that which he forbids you …” (59:7). A sheikh asked a Muslim, why he is not worshiping Allah. He said: Iman is in the heart, & everything he asked him, he pointed to the heart. Finally, the sheikh asked, “where is your beard?” the brother also pointed to the heart. Subhanallah! Is the beard also in the heart?

“Whoever revives an aspect of my Sunnah that is forgotten after my death, he will have a reward equivalent to that of the people who follow him, without it detracting in the least from their reward” [Tirmidhi]. The one who denies the Sahih Sunnah is a disbeliever, because he is expressing disbelief in Allah and His Messenger, and rejecting the consensus of the Muslims. Proof? https://islamqa.info/en/115125, https://islamqa.info/en/604

The next time someone tells you “Don’t worry about it, it’s just a Sunnah”. Please say to him or her “I will worry about it because it’s not just a Sunnah but it is “The SUNNAH”. We need to abide by all the authentic (NOT FABRICATED) Sunnah; without picking & choosing. We cannot love & hate the Sunnah at the same time. Stop the double standard. If the label fits you, wear it. Tap these playlists/links for useful resource materials on Hadeeth/Sunnah

2.  The Proof of the Preservation of The Sayings of The Prophet – AbdulRaheem Green https://www.youtube.com/watch?v=XOr9k_br92U

3. The Sciences of Hadith by Dr. Bilal philips 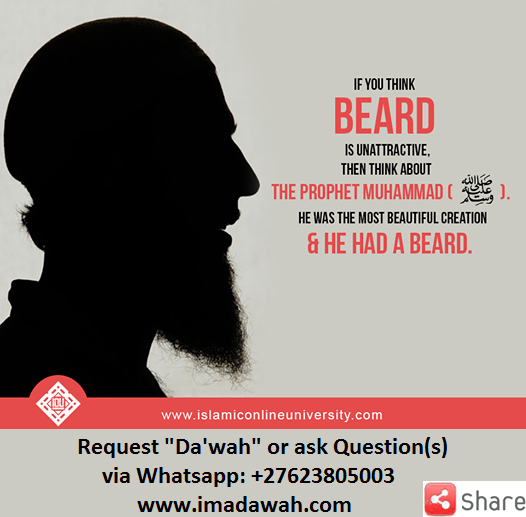 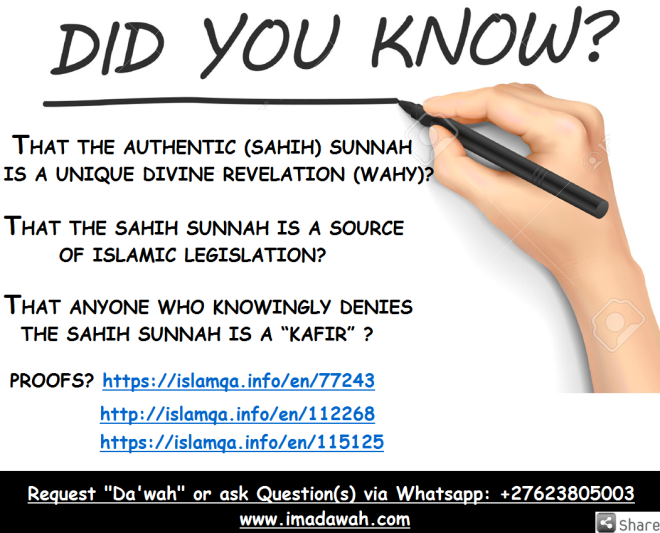 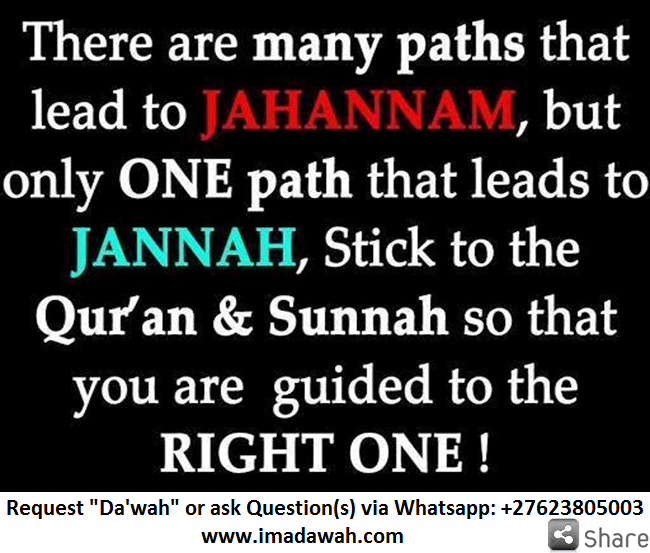 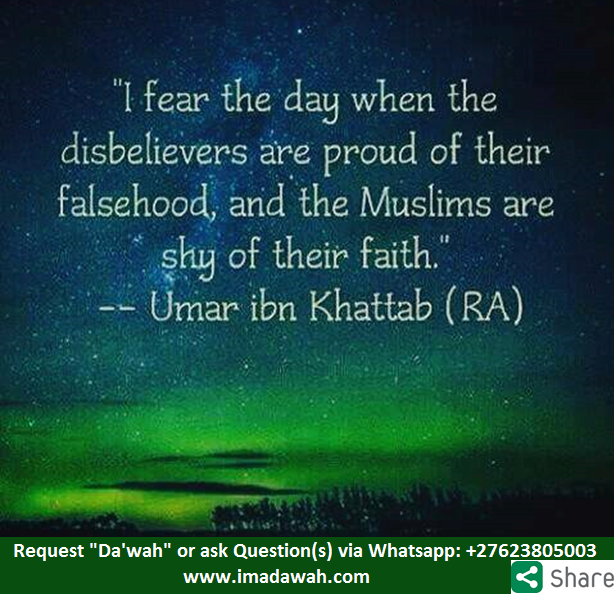 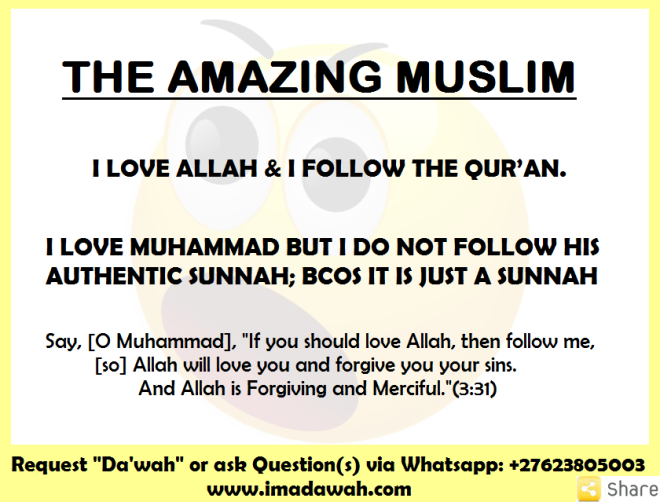 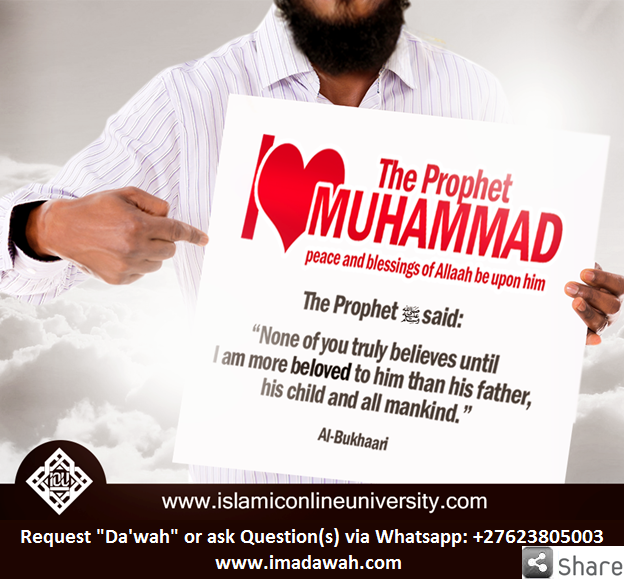