“The Prophet is closer to the believers than their own selves, and his wives are their mothers (as regards respect and marriage)”[Q33:6]. “….say not to them a word of disrespect” [17:23].

The shias; enemies of Allah say that motherhood in this verse only refers to the prohibition of men marrying the wives of the prophet (sallAllaahu ‘alayhiwasallam). We say, that the 1st part of the verse refers to all believers (men & women) & it continues with the second part referring still  to the believers (men & women). If this motherhood refers to prohibition of marriage to them, we may as well ask whether women believers are allowed to marry women in Islam. This is motherhood of honour. The same way ummul Quraa refers to Makkah; mother of all cities. Ummul Quran refers to surah Al fatiah etc.

Abu Sa‘eed al-Khudri (radiallahuanihu) : “The Messenger (sallAllaahu ‘alayhiwasallam) said: ‘Do not slander my Companions, for if one of you were to spend an amount of gold equivalent to the size of Mount Uhud, you would not even come halfway up to their level.” (Bukhaari). ‘Aa’ishah & all the other Mothers of the Believers are included among the Companions of the Prophet (sallAllaahu ‘alayhiwasallam), so every text that forbids slandering the Companions refers to ‘Aa’ishah too.
All Scholars of Islam e.g. Ibn Hazm, Abu Bakr ibn al-‘Arabi, Al-Qaadi Abu Ya‘laa, Ibn Abi Moosaa, Ibn Qudaamah, Imam al-Nawawi, Ibn al-Qayyim, (rh), Al-Haafiz ibn Katheer ,Badr al-Deen al-Zirkashi, Imaam al-Qurtubi etc. unanimously agree that  whoever condemns ‘Aa’ishah (radiallahuaniah) for that of which Allaah has stated in the Quraan that she is innocent of  is a kaafir without doubt, committed complete apostasy (out of the fold of Islam), has no right to marry a Muslim etc. based on  the reasoning  below:

Imaam Ibn Hazm quoted a report with an isnad going back to Hishaam ibn ‘Ammaar, who said: “I heard Maalik ibn Anas say: ‘Whoever curses Abu Bakr should be whipped, and whoever curses ‘Aa’ishah should be killed.’ He was asked, ‘Why do you say that concerning (the one who curses) ‘Aa’ishah?’ He said, ‘Because Allaah says concerning ‘Aa’ishah, (ra) : “Allaah forbids you from it [slander] and warns you not to repeat the like of it forever, if you are believers.” [ 24:17]’”.Maalik said: “Whoever accuses her goes against  Allah in the Qur’aan, & whoever  (knowingly  & deliberately) goes against the Qur’aan should be killed. “The matter is very clear to those who have insight.”. The Quran clears mother Aaisha of the allegations of zina.. https://islamqa.info/en/954

The most beloved of all people to him (sallAllaahu ‘alayhiwasallam) was ‘Aa’ishah al-Siddeeqah bint al-Siddeeq, as is proven in the report of ‘Amr ibn al-‘Aas, who said: “The Messenger put me in charge of an army during the ghazwah (campaign) of al-Salaasil. I came to him and asked him, ‘O Messenger of Allaah, who among the people is most beloved to you?’ He said, ‘Aa’ishah.’ I asked, ‘Who among men?’ He said, ‘Her father.’ I asked, ‘Then who?’ He said, ‘‘Umar,’ then he mentioned a number of others.”
So whoever feels hatred towards the beloved of the Messenger of Allaah (sallAllaahu ‘alayhiwasallam) will deserve to be despised & dealt with by the rulers in this world & by Allah on the day of judgement.  Ibn Qudaamah said: “It is a part of the Sunnah to say ‘May Allah be pleased with him/her’ after mentioning  all companions including the wives of the Prophet, Mothers of the Believers who are also companions, pure & innocent of  evil. The best of them are Khadeejah  bint  Khuwaylid & ‘Aa’ishah  bint al-Siddeeq,; (they are) the wives of the Prophet (sallAllaahu ‘alayhiwasallam) in this world & the next. Al-Haafiz ibn Katheer, (rh), said: Allah would not have made ‘Aa’ishah the wife of the Messenger if she had not been good, because he is better than any good person. If she had been bad, she would not have been fit to marry him from a shar‘i point of view, and Allah would never even have decreed it.”. Allah says “Bad statements are for bad people (or bad women for bad men) and bad people for bad statements (or bad men for bad women). . . ” [24:26].If Allaah has forbidden us even to say “uff” [ “a word of disrespect”] to our parents, how about those who curse not only their biological mothers but their Qur’anic mothers who are companions of the Prophet, ahlul bayt (members of the household of the prophet),superior  & more deserving of our honour than our biological mothers ?

According to the Kufaar  Shi’a so called scholars ; they claim that  the prophet (sallAllaahu ‘alayhiwasallam) left the authority to divorce his wives after his death to Ali (radiallahuanihu) &  he did so. Bihar al-Anwar, by Allama Majlisi, vol. 22, p. 495., Al-Ghayba, by Al-Tusi.

Aishah (radiallahuaniah) narrated that she was once mentioned in the presence of a man & he insulted her. It was said to him “Is she not your mother?” He said, “She is no mother to me!” So I, (Aisha) was informed of this. I REPLIED, “HE HAS SPOKEN THE TRUTH, FOR I AM THE MOTHER OF THE BELIEVERS, BUT AS FOR THE DISBELIEVERS, I AM NOT THEIR MOTHER” [Narrated by Imam al As-Bahani al Teemi in al Hujah fee bahan al Mahajah].

SO CLEAR CUT, SHI’AS ARE UNBELIEVERS. Can anyone who curses his/her biological or Quranic mother & dies over that escape hell fire or go to paradise?. Food for thought for the kufaar shias to re-think whether they want paradise or hell.

Kuwait has stripped the  wanted Shi’a (Kafir): Yaseer Al Habib of his citizenship for insulting the Mothers of the Believers in the UK. 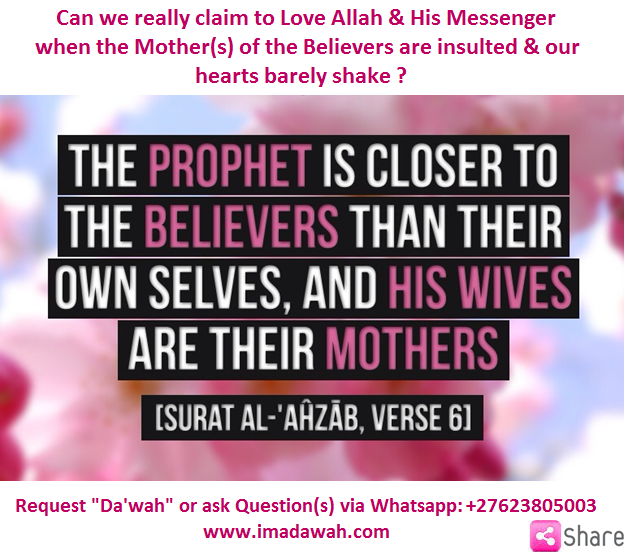 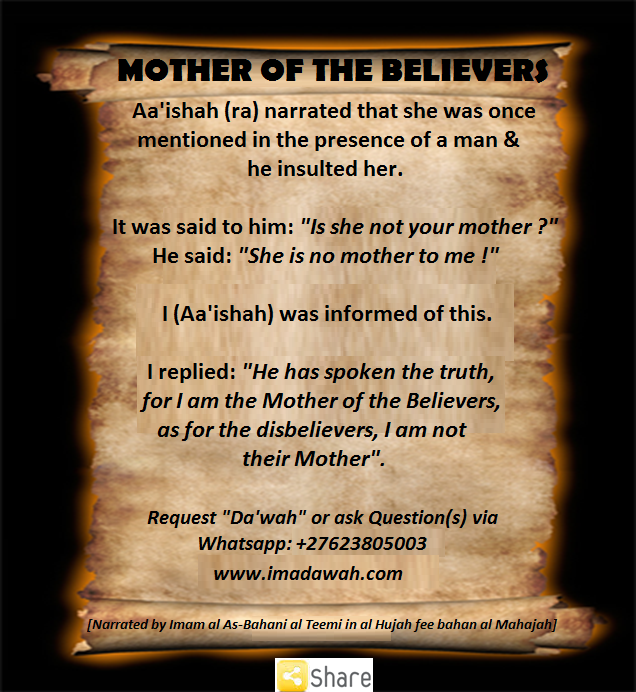