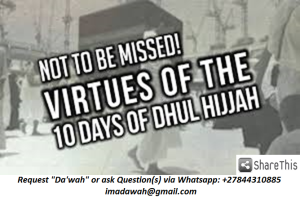 Praise be to Allaah Who has created time & has made some times , some months, days & nights better than others, when rewards are multiplied many times, as a mercy towards His slaves. This encourages them to do more righteous deeds & makes them more eager to worship Him, so that the Muslim renews his efforts to gain a greater share of reward, prepare himself for death & supply himself in readiness for the Day of Judgement.

This season of worship brings many benefits, such as the opportunity to correct one’s faults & make up for any shortcomings or anything that one might have missed. The wise person is the one who makes the most of these special months, days & hours & draws nearer to his Lord through acts of worship & be safe from the flames of Hell. (Ibn Rajab, al-Lataa’if, p.8)”And worship your Lord until there comes unto you the certainty.”[15:99]”‘The certainty’ means death.”

Many facts indicate that these 10-days are better than all the other days of the year, WITH NO EXCEPTIONS, NOT EVEN THE LAST TEN DAYS OF RAMADHAN. But the last ten nights of Ramadhan are better than the nights of these 1ST 10-days,because they include Laylat al-Qadr (“the Night of Power”), which is better than a 1000 months.

1.Allaah swears an oath by them, indicative of their importance & great benefit. “By the dawn; by the ten nights” [89:1-2]. Ibn ‘Abbaas, Ibn al-Zubayr, Mujaahid & others of the earlier & later generations said that this refers to the  1ST 10-days of Dhu’l-Hijjah.”

2.The Prophet (saw) testified that these are the best days of this world in above saheeh ahaadeeth.
3. These ten days include Yawm ‘Arafaah (the Day of ‘Arafaah), on which Allaah perfected His Religion. Fasting on this day will expiate for the sins of two years.

5.These ten days include the days of Umrah & of Hajj.

WHAT SHOULD WE STRIVE TO DO ON THESE DAYS?

1.PERFORMING HAJJ & UMRAH. One of the best deeds that one can do during these ten days is to perform Hajj to the Sacred House of Allaah. Prophet (saw): “An accepted Hajj brings no less a reward than Paradise.”

2.SACRIFICE. One of the good deeds that will bring a person closer to Allaah during these ten days is offering a sacrifice, by choosing a high-quality animal.

RESTRICTIONS ON ONE WHO INTENDS TO SACRIFICE.

Prophet (saw) said: “When you see the new moon of Dhu’l-Hijjah, if any one of you wants to offer a sacrifice, let him not remove anything from his hair or nails until he has offered his sacrifice.” (saheeh).Other restrictions of not wearing perfume, not having intercourse with his wife or not wearing sewn garments & so on are not applicable to him but to those in the state of  Ihram. Hair or nails may be removed as a result of health or other urgent necessities. If a person removes some of his hair & nails during the first ten days of Dhu’l-Hijjah because he was not planning to offer a sacrifice, then he decides to sacrifice, he should refrain from cutting his hair or nails from the moment he makes the decision. This only applies to the one who has bought it with his/her wealth not his/her spouse or children. For more details http://islamqa.info/en/70290